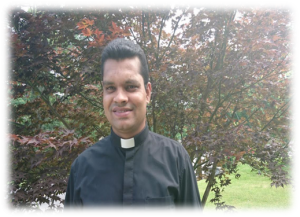 I was born to my parents, Brijith and Jose, on February 22, 1982 in Thirumeni, Kerala, India. I am one of three siblings. I have one brother Babu Jose and one sister Betty Jose. My hometown is Thirumeni. Thirumeni has two meanings. The first one is a person who has a sacred body, and the second is a Bishop. In Syro -MalaIankara Catholic Church, is respectfully called Thirumeni. I grew up on the hillside of Korali. The area is mostly Hindus. I was baptized as Augustine Thadathil on February 1, 1983 at St. Antony’s Catholic Church of Thirumeni.  Augustine is after my grandfather and Thadathil is my family name.

I went through public School in Thirumeni. I went to the private college of Mahatma College Cherupuzha for 11th and 12th grades. I gained a special love for missionary priests at a very young age on seeing many priests and seminarians at my parish. After the 12th grade, I joined the Missionaries of the Sacred Hearts of Jesus and Mary in June, 2001 in Kelakam, India. There were 18 of us from five States in the first year for the orientation course. In India each state has its own language and culture. After philosophical studies and Novitiate, I made my first profession in the Missionaries of the Sacred Hearts on May 25, 2005 in Sagar, Karnataka, India. I went to St. Joseph College Bangalore and earned my BA in Economics, Political Science and Sociology.

After my BA studies, I went to study theology in Kristu Jyothi College in Bangalore. During my third year of theology, I made my final profession in the Missionaries on June 11, 2010 on the Feast of the Sacred Heart. I was ordained as deacon at the end of my third year in theology on March 19, 2011 and sent to work with a fishermen community as part of my diaconate ministry in Trivandrum India. Then the great day arrived in my life on January 4, 2012 when I was ordained as a priest by the Most Reverend Archbishop George Valiyamattom, of the Archdiocese of Tellicherry. Soon after my ordination I served 16 months at Infant Jesus Forane Church Kanhangad as the parochial vicar under the Archdiocese of Tellicherry.

After serving at Infant Jesus parish, I went back to my community in Kelakam in May of 2013, and helped young seminarians in their discernment of religious vocation.  After over a year I came to the US on July 4. 2014 and lived until the end of that October at Villa Pieta Missionaries house in Linwood, New Jersey. During this time I served at two nursing homes, Villa Raffaele and Our Lady’s Residence nursing homes in Pleasantville, New Jersey. I came to Fairfield, PA at the end of October, 2014 and helped our missionary priests with Masses at St. Mary’s and St. Rita’s Churches. I also served at the National Grotto of Our Lady of Lourdes and the Basilica of St. Elizabeth Ann Seton in Emmitsburg, until I was assigned as parochial Vicar at St. Mary’s Catholic Church in Fairfield and St. Rita’s Catholic Church in Blue Ridge Summit in July, 2015. I found so many wonderful and holy Catholics at these parishes, and I was fortunate to serve them. After two years of serving there, I moved to St. Joseph the Worker Church in Bonneauville, Gettysburg, Pennsylvania in May, 2017. I thank God for calling me to be a missionary priest. Also I thank my beloved people for letting me serve you at St. Joseph’s, Bonneauville.

Father Benny Jose was installed as pastor of St. Joseph the Worker by Monsignor James Lyons on June 11, 2017.